by Louise Burgers. Africa’s 100 Most Admired Brands were revealed on this Africa Day, 25 May 2020.

by Louise Burgers. On this Africa Day, May 25, 2020, the most admired 100 brands on the continent were revealed in a global broadcast across multiple platforms which coincided with the opening of the stock exchanges in Kenya, Nigeria and South Africa, as an added demonstration of brand value. Sporting and digital brands lead the pack of the most admired brands this year, with Nike, Adidas and Samsung leading the top three spots.

The objective of the launch was to show the resilience of Africa’s best brands, the brand’s most admired by African consumers; and discuss the future of brands after the COVID-19 crisis has disrupted global markets and “wreaked havoc” on global brands, said Thebe Ikalafeng, founder and chairman of Brand Africa and founder and CEO of The Brand Leadership Group, which conducts the annual survey to determine the 2020 Brand Africa 100 Most Admired Brands on the continent, both global and homegrown brands. This is also the 10th anniversary of the launch of the Brand Africa 100. Based on a study by GeoPoll across 27 countries, spanning all five economic regions in Africa, and analysed by Kantar, Brand Africa 100 provides a ranking of the brands top of mind with African consumers and “most admired”. Collectively the countries surveyed account for over 80% of the population and over 80% of the GDP of Africa. This year Namibia and Mauritius were added to the list of countries surveyed.

Top 10 Most Admired Brands in Africa 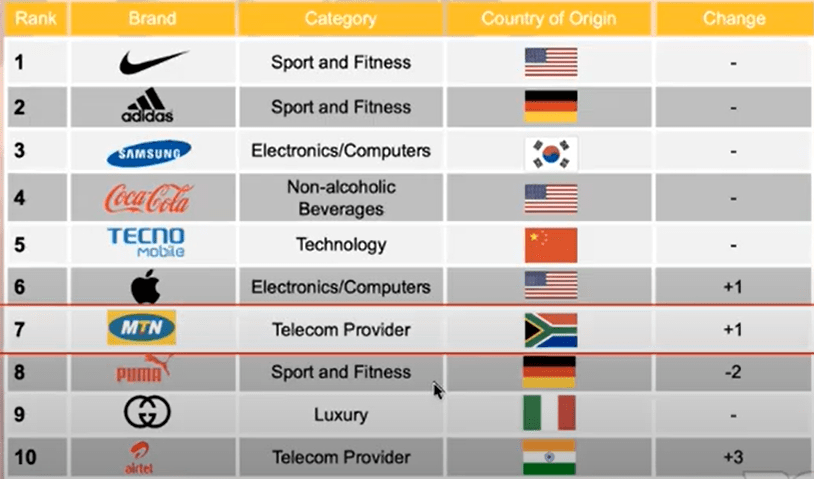 “There you have it: 87% of these brands are not from Africa. We have our work cut out for us,” Ikalafeng commented.

Nigerian and South African brands dominate the homegrown brand stakes. Ikalafeng singled out Ethiopian Airlines as one to watch as a case study on how to build a great national brand; as well as Azam in consumer goods; and IVM, an auto manufacturer. Then there were the new kids on the block: Amazon from nowhere to number 56; Alibaba Group which has no products in Africa but set up an innovation prize in Africa and now comes in at number 92. Ford is back at 55. But Dolce & Gabbana is not so cool anymore and has fallen down the rankings to 98. Danone has gone to number 30, up 60 points, because it has been continually active with its marketing, sponsoring global youth tournaments, and through mergers and acquisitions, Ikalafeng explained further. 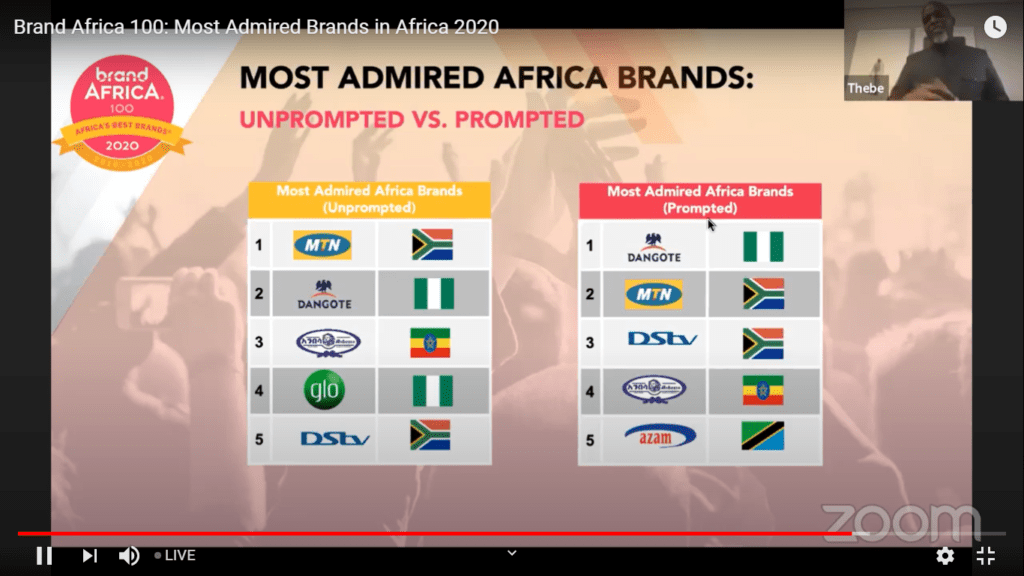 The survey also isolated the African brands this year and looked at ‘unprompted’ responses. This was the result:

But when Brand Africa delved deeper into the research survey and asked consumers why these were such admired brands in Africa, prompted with specific questions; Dangote came out tops; followed by MTN; and then DStv, which connects over 80 million subscribers across Africa. “When you walk around the streets of Lagos, and in many other countries, you see the Dangote brand everywhere. In addition to the great work the company is doing in building the brand, the founder is well-known – people also associate the brand with Aliko Dangote,” added Ikalafeng.

In unpacking the financial services market, the most admired brands were overwhelmingly African in this category: 72% are made in Africa; and 16% are mobile:

Most admired listed brands on South Africa’s Johannesburg Stock Exchange, features MTN, Multichoice, Clover, Tiger Brands and Shoprite, with MTN leading the pack with a R97 billion market capitalisation and a ranking of 7 on the 2020 Brand Africa Top 100. In Kenya, it is Safaricom Twaweza (taken out of the Vodafone group and looked at individually) on the Nairobi Securities Exchange which leads with a market cap of Ksh 1.16 trillion and a BA100 ranking of 13 as part of the group. On the Nigerian Stock Exchange, brands that are at the top are Maltina, Star and Dangote, with Dangote as the dominant brand with a market cap of NGN 2.56 Trillion, coming in at 15 in the BA100.

Ikalafeng started off proceedings early this morning after the African Union anthem was played to mark Africa Day, by outlining some of the key trends on the Brand Africa 100 brands listing:

Ikalafeng, who has visited every country in Africa, spoke about how 34% of brands that Africans admired were African a decade ago in 2010; but that in 2020, in the midst of a global crisis which will cause further brand disruption, that number had dropped to 13% in 2020. A reason for this included mergers and acquisitions; digital disruption, as well as the disappearance of brands like Blackberry.

A total of 27 countries were polled this year via mobile surveys driven by Kantar and GeoPoll and included Namibia and Mauritius for the first time. They analysed 15 000 brand mentions across the continent. To make it onto the list for the Top 100, brands must be Pan-African and recalled in at least one other country, other than their domicile market, pointed out Karin Du Chenne, chief growth officer Africa Middle East at Kantar. Four areas were covered: Most Admired Brand (any); Most Admired African Brand; Most Admired Financial Services Brand; and Most Admired Media Brand. Du Chenne highlighted the significant insights from the research:

Du Chenne said the brands that make up the top 100 are dominated by US brands; but many are still perceived to be ‘African brands’, such as Coca-Cola which has been around so long it is seen as integral to African lifestyle; and Nike and other brands that have got behind sports and African influencers such as sporting stars and musicians. Her advice is to ‘Think Locally; Act Globally’. “This is what brings  success in Africa,” she added.

The full report and list of all 100 brands will be up on BrandAfrica.net later this week.