by Louise Burgers. It’s nice to see new product launches, brand extensions and brand refreshes for normal products like yoghurt and pet food; and the innovation coming from the cleaning industry to safeguard our health during this time of corona. 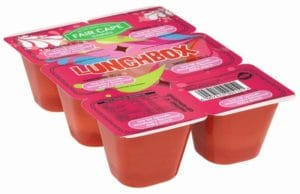 Just in time for summer and back-to-school for our poor kids in this crazy year, Fair Cape Dairies has launched a strawberry-only version of its smooth six-pack yoghurt Lunchbox range. Strawberry is the most popular flavour combo for kids and fussy eaters; and yoghurts are a staple for school lunchboxes, hence the convenient six-pack that fits into most lunchboxes and cooler boxes. The pack size is six 80ml tubs; and recommended retail price is R10.99 – R11.99. Fair Cape Dairies is a once small-scale dairy farming operation run by the Loubser family for more than five generations, which has grown to become one of South Africa’s leading commercial dairy brands. The business prides itself on its commitment to ethical business practices, and has developed three pillars on which it positions its business: animal welfare, environmental welfare and social welfare.

COVID-19 has certainly brought out the innovators. There is now a clear stick-on plastic film with effective anti-microbial properties that can apparently protect all surfaces that would usually be touched by the public in high traffic areas when entering your store or building – from door handles to counters to restrooms. The product is Pure Zone and the distributors claim it can protect against 99.9% of bacteria. Pure Clean Zone says its product has recently passed the ISO21702 standards test, which confirmed that it reduces the coronavirus’s viral load by 99,87% within just an hour. It’s got something to do with the silver ion technology which even provides protection for up to five years. Ray Langa, sales director for Pure Clean Zone says, “Pure Zone is a product that came into South Africa at just the right time. Businesses buy it once-off and it has a five-year lifespan. And in a period when the world as we knew it has changed drastically, everyone needs to be more conscious of bacteria than ever before. This protective film is, first and foremost, designed to make environments safe, protecting employees and significantly cutting down on the worry factor – and even cleaning costs.” I wonder if there is a home use. Could one wrap one’s children in it? The entire kitchen? Asking for a friend.

Back to Categories
Innovation
The future of inventory management