TRENDING: Brands must practise what they preach

by Louise Burgers. The lesson for brands and all corporations is – practise what you preach, or your consumer will come for you. There is nowhere to hid on social media.

by Louise Burgers. If you’re in media or brand communications, you know that on significant days, a lot of the same kind of press releases are sent out from brands detailing their corporate social responsibility initiatives in this regard. Things like Mandela Day, Heritage Day, Women’s Day, etc. Some of the initiatives and programmes are great and get good publicity – even more so, when not focused on the significant day only, but part of a broader sustainability programme with impact.

There is a difference these days though, that brands need to take note of, or face bad publicity – the consumer is much more aware and more conscious of their social footprint than ever before; and look to brands and corporations to leverage the weight of their corporate power – influence and marketing spend – to do good, not evil in the world.

It is not only the increased awareness of social and environmental issues over the past three decades, especially climate change, that is driving a more aware consumer. The pandemic has had a lot to do with a consumer shift to overall health and wellness. This includes wanting to know more about the ingredients in their food; whether the packaging on their products is sustainable; where goods are sourced; and what the sustainability initiatives are from their favourite brands. And of course – the younger generations, Millennials to Gen Z – are much more aware of their impact on the world; and have access to social media to voice their concerns and opinions.

Basically, if you want consumer loyalty, brands need to prove their worth.

Bring on the bots 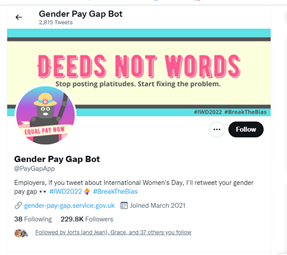 A fascinating case study played out this week as brands around the world marked International Women’s Day on 8 March 2022 with the usual sugary, flowery, pink framed social media messaging in support of women empowerment in their own organisations, among their clients and customers, and women around the world in general. So few brands get it right, often treating Women’s Day like Mother’s Day, with a pink colour scheme and flowers. So, most women ignore brand attempts in this space as missing the mark anyway.

Companies in the UK are required by law to submit salaries when they employ more than a certain number of staff, so the information is freely available on UK Government websites. What these young activists did over lockdown last year, was collate this information into a programme that could be used to shame those brands which were paying women less than men in their organisations, for their false messaging. These included all types of brands, banks, universities, local councils, charities, political parties, and more.

Gender pay gaps revealed were from 80% in some cases to 20%-30% in many cases, where women were paid less than men. Some companies deleted their tweets in haste, but not fast enough for their customers to retweet or for all deleted tweets to be compiled into another social media thread.

Talking to Vice, Lawson said it was important to highlight the problems so that they didn’t persist forever. “We created the bot to make sure that this data isn’t just forgotten about – it’s in the spotlight. By talking about it, we can begin to put pressure on employers to start changing their hiring practices, and paying everyone more.” Now that something like this has been done – expect other activists to create similar innovations on other social issues to call out companies which do not comply.

All it took for Lawson and Fensome, is to export all the gender pay gap data from their government’s site into a CSV format, which they then collated for the five years reporting in the UK has been compulsory. Then they wrote the code that searches Twitter for company names and a series of keywords related to International Women’s Day. You can follow the whole thread @PayGapApp on Twitter.

The lesson for brands and all corporations is – practise what you preach, or your consumer will come for you. There is nowhere to hid on social media.

In this organisation, women's median hourly pay is 73.2% lower than men's. https://t.co/vFx2FbgnfK

In this organisation, men's and women's median hourly pay is equal. https://t.co/YrBRRyoeQ8