With the unbanning of liquor and tobacco product sales under Level 2 of #lockdownSA, these industry sectors can get back to work – but, devastatingly, not without huge job losses and business closures.

With the unbanning of liquor and tobacco product sales under Level 2 of #lockdownSA, which comes into effect at midnight tonight, two industry sectors which employ hundreds of thousands of people and even more indirectly through suppliers – including the packaging industries; road freight; marketers; advertising agencies; promotors; and of course the restaurant industry, etc., can now get back to work and start rebuilding. 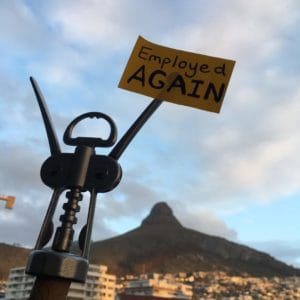 Wine industry body, Vinpro, estimated that the initial nine-week ban on local wine sales, as well as the five-week ban on exports, will result in 18 000 lost jobs; and the closure of 80 wineries and 350 grape producers in the year to come – in the wine industry alone. Stats SA food and beverage data for April and May shows a decline in revenue for this sector of 94% and 87% respectively from 2019 revenues. Wine is the third biggest export product of the Western Cape Economy and contributes 6.5% of the value of exports from the province and the wine industry is dominated by smaller businesses. In turn, British American Tobacco SA (Batsa), said there had already been 30,000 job losses in the industry since lockdown was implemented along with a tobacco ban, and that the ban had cost the state R35 million every day in excise tax losses (over R4 billion in the first 4 months of #lockdownSA).

The Franchise Association of South Africa (FASA) has called on the banking sector to come up with funding solutions to stimulate growth in the sector. FASA has supported Business 4 South Africa (B4SA) in calling for urgent action to turn the economy around. It joined other business organisations in putting forward B4SA’s economic blueprint that should go some way to mitigating the devastating fall-out due to the pandemic by implementing far-reaching economic reforms that will drive growth and employment and restore consumer and business confidence.

The franchise sector, which in South Africa is represented in around 14 different business sectors, represents the highest and most diverse range of entrepreneurial endeavours and is the most suited to lead the post-Covid recovery.  FASA’s 2019 survey showed a sector that contributed R734 billion (almost 13,9%) to the country’s GDP through its over 800 franchise systems, its 48,000 outlets employing close to a million people. “This should instil confidence in the business sector for development funders, banks, landlords and other stakeholders”, says Vera Valasis, executive director of FASA, “But unfortunately no meaningful offers have been forthcoming from the banking sector, for example. Now more than ever before, there is a huge responsibility on the banking fraternity to acknowledge the unique benefits of franchising as well as the sector’s successful track record and the fact that they have benefitted from this sector for over 50 years. They should step up to the plate now with funding solutions that are less risk averse with simple application processes that can stimulate growth for franchisors by way of rapid distribution growth which in turn would create jobs and stimulate disposable income; which in turn will stimulate the growth of further franchise brand growth as the industry depends largely on consumerism.”

Despite the doom and gloom of our current health and economic situation, Valasis, said she believes that the franchise industry will make a faster and better recovery post-Covid than most other business categories due to assistance from franchisors and the support from being part of a network. “Even if individual or family owned business owners do belong to small business networks or other industry bodies, these organisations – although they offer help and assistance – will never have the intimate knowledge and understanding of their business model like a franchisor and fellow franchisees would have.”

She said success will require franchisors to support franchisees and customers by pivoting their business models to better suit the changing marketplace. Already many of FASA’s members are re-strategising and re-shaping their business formats to incorporate smaller stores, ‘dark kitchens’ and online trading. As a case study in this regard, franchise group Real Foods is leading the way in post-Covid recovery by diversifying its business and growing its footprint abroad; has launched two new brands and acquired a food manufacturing business. Locally, Real Foods launched Free Bird, a free-range crispy chicken burger concept. Free Bird is initially trading as a virtual brand in dark kitchens around Cape Town, Sandton and Pretoria – available via UberEats and Mr D, with plans for physical retail locations over the coming months. “It’s been a challenging few months, but we have reacted quickly and in step with government’s guidelines, to find new routes to market to serve our customers, and have launched exciting new products and brands that have been well received. The various teams have also continued to work throughout lockdown on building a pipeline of projects that will be rolling out in the second half of the year,” said Real Foods CEO, Dean Kowarski. 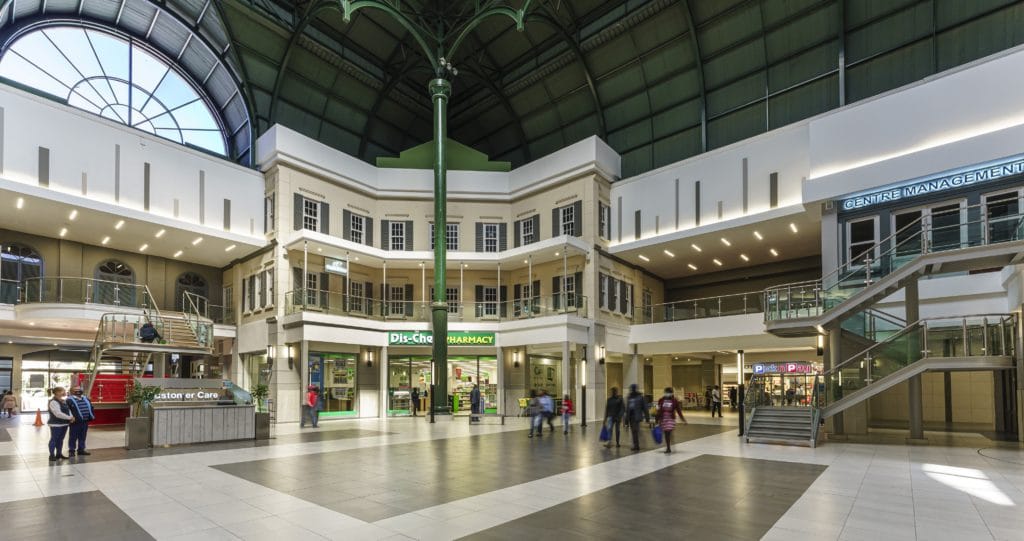 Lakeside Mall, Benoni, has concluded the final phase of a three-year, R135-million upgrade programme; and added new anchor tenants Pick n Pay and Dis-Chem to its 130-strong retailer mix. Pick n Pay opened at Lakeside Mall in a 2,500sqm store and Dis-Chem in a 1,400sqm store at the end of July 2020, amid the COVID-19 national lockdown. Pick n Pay Liquor will open in 130sqm premises once Level 2 takes effect and the alcohol ban lifts. Placing these popular national retail brands side-by-side has created a powerful anchor that balances and complements the weighty combined appeal of Lakeside Mall’s Woolworths, Shoprite and Clicks, which are on the opposite side of the 67,000sqm regional shopping centre.

The redevelopment concludes Growthpoint’s three-year, multimillion-rand programme of investment and improvement at Lakeside Mall. In 2018, it began upgrading the mall’s interior to achieve a modernised aesthetic. This refurbishment created a clean, contemporary look with new entrances, ceilings, tiles, columns, handrails, upgraded ablution facilities and energy-efficient lighting. The recent upgrades, alternations and additions refreshed and enhanced the unique features of Lakeside Mall including its 160-metre long steamboat that appears to be floating on Benoni’s Civic Lake and its town square surrounded by the facades of buildings within the mall’s building. In 2014, Lakeside Mall’s 5,000sqm 13-cinema complex closed and remained empty. Mark Langley, retail: head of development at Growthpoint Properties, reveals, “The reconfiguration and introduction of Pick n Pay and Dis-Chem to Lakeside Mall was made possible by Shoprite waiving the exclusivity clause in its lease for the benefit of the shopping centre and its customers, which is commendable indeed.” To restructure the former cinema space for retail purposes, Lakeside Mall’s owner, Growthpoint Properties, invested R75-million in its redevelopment; and the parking area was upgraded and new delivery access constructed and delivery sites.

Dis-Chem Pharmacies added seven new stores to its footprint during July and August, adhering to its planned expansion timetable. July saw the group opening doors to its new stores at the Valley Hyper (Nelspruit), The Neighbourhood (Linksfield), Benoni’s Lakeside Mall and the Musina Mall (Musina). Further openings in Mooirivier Junction (Potchefstroom), Makhado Crossing (Louis Trichardt) and Parow (Cape Town) are scheduled for August. Adding to this is the scheduled opening of an additional store in the Gallo Centre in Francistown, but this is dependent on the reopening of borders. Once the Francistown store opens, it will take the total number of Dis-Chem stores in Botswana to two; with a concomitant footprint increase in South Africa to 180 sites. The July and August openings will increase Dis-Chem’s total retail space to just over 241 000m².

Ivan Saltzman, Dis-Chem’s CEO says the group plans to open a further 10 stores before the end of the year, although certain locations may be hampered by construction delays or catch-ups. “We are currently on track to meet our expansion plans and we are fortunate that the delays brought about by lockdown have not had a material impact on the roll-out of new sites.” He said unanticipated delays may result in a small number of site openings being pushed into early 2021, but these will run alongside expansion targets. Dis-Chem says 21 new stores have already been identified and secured for FY2021 and growth in the brand has made it an anchor store in malls, to reach the group’s target of 200 stores by 2021/22.

Vinpro estimated that the initial nine-week ban on local wine sales, as well as the five-week ban on exports, will result in 18 000 lost jobs; and the closure of 80 wineries and 350 grape producers in the year to come – in the wine industry alone. Stats SA food and beverage data for April and May shows a decline in revenue for his sector of 94% and 87% respectively from 2019 revenues. So, while we head to Level 2 and the ban on the sale of alcohol has been lifted, the economic impact has been catastrophic on the industry.

“People are looking for authenticity; they are looking for brands that will solve problems, solve their needs, and to connect with people like human beings. That is really easy to forget, that at the end of the day, you are selling to warm blooded human beings and the margin for any business is in the magic and in the messy human interaction. That is where profit margins lie. So, follow human beings and connect with people on a personal level,” said economist and futurist, Bronwyn Williams, interviewed in RetailingAfrica.com.

Back to Categories
Claudia Smith
The power of time