With mass retrenchments looming, there really was no choice in opening up the economy further – especially after only 21% South Africans reported that they could work under lockdown level 4.

It has been a busy week of news with the easing of lockdown level 3 restrictions beyond what Government originally envisaged for levels 2 and even level 1; but with mass retrenchments looming across industry sectors, there really was no choice in opening up the economy further – especially after only 21% of South Africans reported that they could work under lockdown level 4. There’s nothing new yet on the tobacco ban which came into force under hard lockdown level 5 in March in South Africa, with Government awaiting the outcome of urgent court applications filed by various tobacco interests. We should hear more this week.

Seams were unravelling at Edcon Group long before loadshedding became a factor and COVID-19 hit. Both factors have been cited by the group, which owns fashion retailers Edgars and Jet stores, and struggling stationery group CNA, as reasons contributing towards the R2 billion loss in revenue that it experienced ahead of hard lockdown in South Africa due to the global pandemic. The 90-year-old company, which was launched in 1926, announced in April, that it could no longer pay suppliers, after a month under lockdown. Lockdown was just the final straw for the group, as clothing retailers were not allowed to trade under lockdown initially; and then only allowed to sell winter clothes. The company, which filed for business rescue in May, affecting over 1000 stores and over 40,000 employees, is looking for a buyer for its assets, so not all staff may lose their jobs.

In April, Retailing Africa retail analyst and trend expert, Dave Nemeth, MD of TrendForward, commented, “This was certainly a long time coming, but it wasn’t just COVID-19 that has destroyed them – they had a massive bailout last year. I think it was due to complete lack of direction and innovation. A business that size should have looked at their ‘basics’ way before they realised they were in trouble. It is very very sad for the staff, very sad for all the people they owe heaps of money to. But at the end of the day, I’m afraid, I put it down to total lack of quality management and foresight.”

In the last public statement put out by the group, Edcon said the appointed Business Rescue Practitioners had published their plan on 8 June after consultation with creditors, landlords, employees committees and communications with SACCAWU. The plan was prepared on an  “accelerated sales process” basis as interest to invest in or provide funding to the company had not been forthcoming: “The key priority and intention of the sales process is to secure the sale of the business and/or its divisions as going concerns, which most notably will involve the transfer of some of the employees, resulting in a significant number of jobs being saved at Edcon.” According to the group there are parties which have expressed interest in the sales process and are required to submit offers by end-June. Payment of salaries was a priority, it stated.

This week Nemeth said the retrenchment announcement was inevitable. He said it was time CEOs and directors needed to take responsibility and be held accountable. “A very sad day. This blame game doesn’t work for me at all. The other issue was that they were focused on the wrong things. They were focused on the financial services side of things and not on basic retailing. All this talk about going back to basics… what basics did they go back to?” 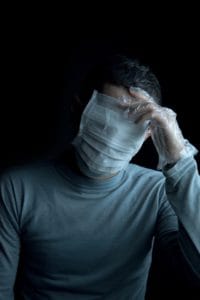 South Africans are more fearful about the economy right now, than of COVID-19. Only 21% of South Africans were working as usual in level 4 of lockdown; 69% said their income had been reduced; and 52% reported that prices of essential goods were significantly higher than usual. According to new Consumer Pulse research from GfK South Africa into the behaviours and sentiment of online consumers during the last weeks of the Level 4 lockdown, “Unemployment and the economy have displaced COVID-19 as the top concerns for South African consumers as they personally experience the economic squeeze after weeks of lockdown.”

“While growing numbers of South Africans or members of their families have been exposed to COVID-19, larger numbers are directly experiencing the economic fallout of the virus and the lockdown,” said Rachel Thompson, insights director at GfK South Africa. “With the majority of consumers reporting decreased income and higher prices, South Africans are feeling the financial pressure.” At the end of Level 4 of the lockdown, 69% of respondents reported that the economic situation in South Africa was worse than a year ago. Despite this, they remained optimistic that the economic impact would be short-term.

Fear and anxiety are prevailing emotions right now, with 70% of consumers feeling fear and sadness during the level 4 lockdown; 43% said they were bored; and 42% said they were anxious. Most (60%), said that they will maintain social distancing for a time or be very cautious in their social behaviour; with just 16% saying that they “can’t wait to get back to all the things I did before social distancing regardless of any remaining risk”. Said Thompson: “Despite their eagerness to go back to the activities they love, consumers also appear to be resigned to deep change in their lives, not much of it positive. Almost half (46%) told us they expect their work situation to be worse after the crisis and 68% expect many small businesses to close. Most (79%) predict that working from home will become the norm.”

The V&A Waterfront is partnering with one of South Africa’s leading Click and Collect service providers, to offer an alternative for shoppers who want to avoid possible exposure to COVID-19 by queuing in shops, but who still want to collect their own goods. The new Click and Collect Drive Through service will allow customers to place online orders with multiple V&A Waterfront stores, and then to collect their parcels themselves. The drive through facility will be positioned at Entrance One of Victoria Wharf Shopping Centre nearest The Table Bay Hotel. The Kiosk itself will be situated outside, in front of Tasha’s restaurant. The new service is based on Pargo’s smart logistics platform that offers innovative omni channel logistics solutions through a tech-enabled network of pickup points. The V&A Waterfront will become the first retail mall to introduce the service which will be piloted until December 2020. The easy to use service allows customers to place orders online with participating retail stores. They will then receive a notification when the parcel is ready for collection. Customers simply drive up to the brightly coloured kiosk, collect their parcel, and drive away. The entire process can be completed without customers leaving their cars.

V&A Waterfront retail sales executive Alex Kabalin said, “We envisage that this click and collect service will be popular with many shoppers as it gives them more control and choice over the delivery end of the process. This is especially useful for anyone who has returned to working in an office. They do not have to rush home for the delivery service or wait at the office, but can collect their shopping at a time that suits them. They can pre-order online during the day and then simply drive through to collect their conveniently packaged goods on their way home.” Click & collect shoppers using the drive through will enjoy all the Pargo perks they have become accustomed too including real-time tracking, delivery status notifications and flexibility around collection times” says Lars Veul, Pargo co-founder and CEO. Participating stores currently include @Home, Cape Union Mart, Sportscene, Fabiani, Foschini, Wizardz, Old Khaki, Totalsports, Markham, Keedo, Poetry, G-Star and many more. More stores are expected to be added.

Consumers expect more of brands, GfK research found, and 44% of consumers will reduce purchases to save money. When it comes to ecommerce, consumers said they expected companies to offer free delivery (60%), fast delivery (64%), click-and-collect options (56%), and telephonic support (55%). Hygiene and COVID-19 control measures such as in-store disinfectant and social distancing were their biggest demand of offline retailers. Many consumers reported negative retail experiences during the level 4 lockdown, with 52% noting that prices for the items they usually buy were higher than normal, 51%  saying that goods were out of stock; with 32% agreeing that they had to purchase brands they would not usually buy. “This landscape is rife with danger for brands, along with some opportunity,” said Rachel Thompson, insights director at GfK South Africa. “Since 44% of consumers said they would definitely reduce purchases to save money, competition for the consumer’s shrinking rand will be fiercer than ever. Brands that abuse their market power at this time may struggle to regain consumers’ trust as we settle into the next normal. They will also need to engage with consumers with great sensitivity as they begin to reactivate marketing and advertising strategies that were paused during the higher levels of lockdown.”

“Many businesses have had to pivot during these times and yes retrenchments have been unavoidable, however, there’s been a distinct and noticeable difference between those which put humans at the centre of the process and those which do not.”

– Lisa Steingold is consulting Head of Marketing for Metaco and a columnist for Retailing Africa.