Clicks goes to court after protest action by the EFF.

Clicks is heading to court to stop protest action threatened by the EFF on Monday.

Clicks will head to court Monday, September 7, 2020, if the Economic Freedom Fighters (EFF) go ahead with threats to protest and “close” Clicks stores in key urban areas. The EFF issued a call for its members to protest at Clicks stores on Monday if the retailer did not close all of its 880 stores for one week. This follows the publication of Tresemme hair care adverts by Clicks online last week that were criticised as racist and insensitive. Clicks has since taken down the ads and issued an apology; which most commentators said did not go far enough in taking accountability or in understanding the pain that it caused. It is shameful that it got through the entire brand, marketing and social media pipeline at both Clicks and Unilever, without anyone questioning the ads or raising red flags.

So many questions that #Clicks need to answer to .Who signed off on this campaign ?Do ad campaigns undergo a racism ,race , culture & human rights check ? Full interview I did with @CvonEck on unconscious bias will give you the why ???????????????????????? https://t.co/0KgUXAf5P5 #AshrafGardaShow pic.twitter.com/9XIB69ODRz

In a statement on the Unilever website, Tresemmé South Africa, also issued an apology regarding its brand images published on the Clicks website: “We are very sorry that images used in a TRESemmé South Africa marketing campaign on the Clicks website promote racist stereotypes about hair. The campaign set out to celebrate the beauty of all hair types and the range of solutions that TRESemmé offers, but we got it wrong. The images are not in line with the values of our brand, or of Clicks. TRESemmé South Africa apologises for the offence these images have caused. We also apologise to the Clicks group. We are looking into how this happened and why it wasn’t picked up, and we will take all necessary steps to make sure it doesn’t happen again.”

The EFF issued a statement on Sunday calling for the protest action. It later published a letter it allegedly received from Clicks’ lawyers, which stated that the retailer would apply for an urgent interdict if the EFF did not retract its calls for protest action at Clicks stores; and that it would pursue damages against EFF leaders in their personal capacity should damage be incurred.

The EFF has received the following lawyers letter from the lawyers of the racist @Clicks_SA pic.twitter.com/CJSA2ZFybK

Eskort goes to a new agency

MetropolitanRepublic has won the Eskort account. The account was up for pitch after 20 years with Value Added Advertising. Eskort’s marketing team, led by group marketing manager, Marcelle Pienaar, went to market with a detailed list of requirements, looking for an integrated agency with strong FMCG and food experience. MetropolitanRepublic said Eskort was a brand firmly rooted in South Africa’s food culture, evoking a strong heritage and memories of family and friends sharing meals. 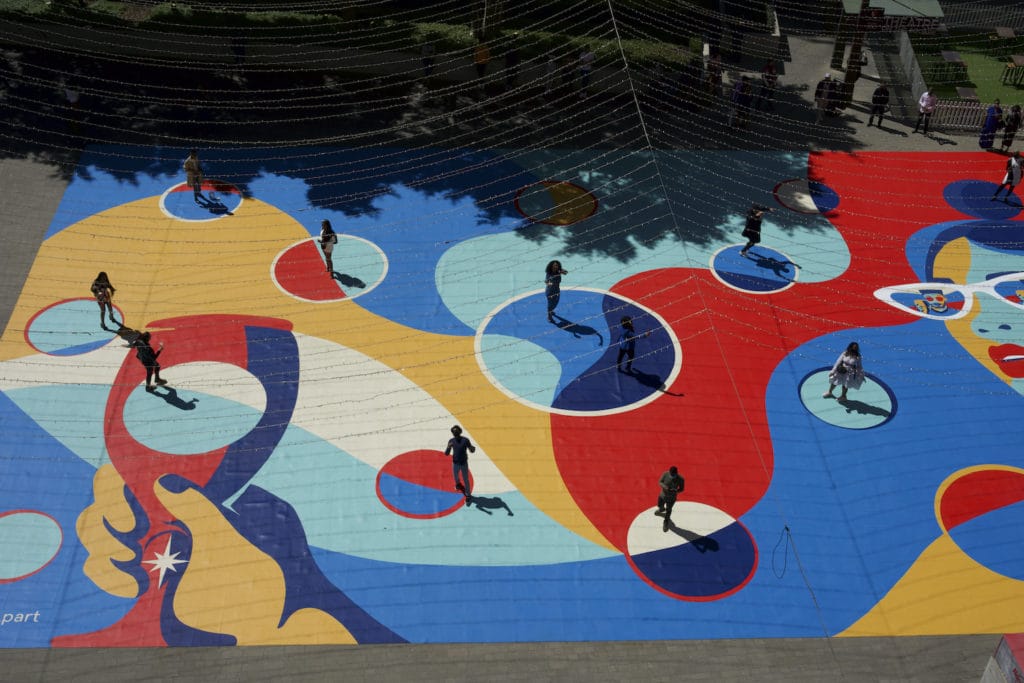 Stella Artois beer has unveiled an art installation on the open-air piazza at Nelson Mandela Square in Sandton, that highlights the theme ‘Together Apart in the Life Artois’. The floor mural features an illustration of a woman raising her a chalice as she greets guests. The differently-sized circles that form part of the piece are all appropriately socially distanced from one another too. AB inbev’s high end brand director for Africa, Marsha Kumire, elaborates on the thinking behind the piece: “Our hope is that the mural will encourage people to still savour life’s beautiful moments together, whilst following the social distancing guidelines that must become the new norm for the next while at least. We chose Nelson Mandela Square’s piazza for the location as it’s an iconic space that has always sought to bring people together… and now still can.” Adapted from a Stella Artois global campaign, the artwork was localised by South African illustrator, Lauren Mitchell. Measuring  21m x 38m in size, the mural offers a colourful and welcome respite from the usual red masking tape and foreboding dark circles most other retail spaces stick on the floor to enforce social distancing.

Social distancing at tills, followed by shoppers and staff wearing masks, was the most desired in-store COVID-19 safety measure mentioned by 70.7% of respondents surveyed by 2Engage and Brands Eye. They found that price has, obviously, became increasingly important to retail consumers; but the research showed the extent that it became a deciding factor in shopping choices because of the pandemic and during the lockdown. In response to the question, ‘What are the main reasons you choose to shop at this store?’, pricing was 81.5%; specials and sales 52.2%; COVID-19 safety measures and sanitation 39.1%; store location near home 35.9%; safety and security in and around the store 34.8%; friendly staff 32.6%; and product variety 30.4%.

“It’s evident that customer experience is a definitive factor when it comes to customer purchasing decisions in both B2C and B2B markets. The more customer-centric a brand is, the higher the success potential for growth and longevity.” – Terena Chetty, brand and content strategist, Africa Communications Media Group, writing in RetailingAfrica.com.