by Louise Burgers. South Africa always shows its strong, kind, caring, true spirit of ubuntu during disasters. Thank you to all the retailers, brands and hotels that stepped up and stepped in to help house and feed 4,000 University of Cape Town students evacuated on Sunday, 18 April, after a fire on Table Mountain damaged historic buildings on campus. Retailers and brands are continuing to deliver food to Gift of the Givers which is co-ordinating feeding the students housed around the city on behalf of UCT; several retailers are organising donations drives and food for the City Firefighters and volunteers’ Working on Fire; as well as for the SPCA and SANPARKS, which are also co-ordinating rescue efforts for injured animals in affected areas.

Early this morning the Shoprite Mobile Soup Kitchen started serving students housed at the Mupine College in Pinelands, and it will continue to serve meals at additional locations providing temporary accommodation for UCT students for as long as necessary. Customers wishing to donate non-perishable food items can do so at the collection trolleys that have been made available at the following Checkers and Checkers Hyper supermarkets in the Western Cape: Rondebosch, Kenilworth, Plumstead, Meadowridge, Tokai, Canal Walk and Brackenfell. Checkers continues to support the firefighters battling the blaze with essentials including water, energy drinks and fruit. In addition, Checkers Sixty60 has committed to credit customers the R35 delivery fee for all orders delivered to the Sea Point Fire Station (4 Kloof Road), Salt River Fire Station (346A Victoria Road) or Cape Town Fire & Rescue (Roeland Street) during the course of yesterday. Pick n Pay is also allowing customers to donate Smart Shopper points to the rescue efforts. Gift of the Givers thanked the following brands and retailers on Sunday for their speedy aid: Massmart, Engen SA, TFG, Woolworths, Pick n Pay, Shoprite SA, Pioneer Foods, Coca-Cola, and Uber, which was offering free rides to stranded students in the evacuation of university residences yesterday afternoon.

“We will always avail our resources to help when disaster strikes,” said Lunga Schoeman, CSI Manager for the Shoprite Group. “We remain in close contact with the Volunteer Wildfire Services and Gift of the Givers regarding any additional aid required to support relief efforts.” Retailers are also reporting that it is like ‘Black Friday’ in some stores around the city as residents clear shelves to donate food and goods needed to the firefighters, evacuated UCT students and the SPCA. Retailing Africa has posted the various links for donations via Twitter @RetailingAfrica. It only took me five minutes to send snacks to the fire station nearest me, via the one retail app I use via the special CT Fires products page they created, including some discounted foodstuffs. I also appreciated the promo code which waived the delivery fee. Impressive.

South African retailer, West Pack Lifestyle, opened its first Western Cape store in Somerset West Value Centre on Saturday, April 17. The new store launch in Somerset West is the company’s anticipated introduction to the Western Cape region, officially solidifying the company’s national footprint with stores across all provinces in the country. The West Pack Lifestyle brand started out with a vision from father-and-son duo, Chris Da Silva Snr and Chris Da Silva Jnr, to make shopping for everyday essentials an adventure. Since its entry into the retail market back in 2008, the company has experienced rapid, yet sustainable growth, with more than 60 stores and a workforce of over 3000 people servicing the sub-Saharan African region. “We are very excited to finally be opening our first store in the Western Cape. It’s something we’ve had in the pipeline for quite some time,” said Chris Da Silva Jnr, West Pack Lifestyle CEO.

Kenyan agency banking startup Tanda, is expanding its operations regionally after securing funding from early-stage African tech investor HAVAÍC, Zedcrest Capital, DFS Lab, Victor Asemota and three other investors. Tanda has also secured key strategic partnerships with Mastercard and Interswitch, which will further accelerate its growth. The company’s expansion comes on the back of successfully pioneering and proving the viability of the interoperable agent and merchant model in Kenya, a model that has only been validated in West Africa prior to Tanda. Commenting on HAVAÍC’s decision to invest in Tanda, Rob Heath, Partner at HAVAÍC says, “Tanda is solving one part of the very deep and complex problem of financial inclusion that is not only Kenyan, but a problem across all emerging and undeveloped markets.” Today, Tanda’s platform and network supports 58 banks and saccos, four telecoms, 18 billers, 12,000 merchants and agents and has served over 300,000 unique customers, all of which have processed millions of transactions to date. Says Geoffrey Mulei, CEO of Tanda, “Our team will continue to run aggressive agent and customer acquisition drives across the region, while securing more strategic partnerships in these new markets to further support Tanda’s growth and strategy as we pursue our goal of digitising payments across Africa. Tanda is excited to be at the forefront of the rapid shift towards innovative digital-first solutions, especially in markets that are ripe for disruption.” Tanda has now set its sights on growing its Kenyan footprint to 100,000 agents and merchants and an expansion to Uganda, Tanzania and Rwanda within the next 24 months. 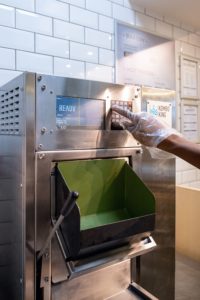 A portable solution to traditional ventilated fryers ensures healthier food and a safer environment for employees and a guaranteed hygiene for consumer peace of mind, as a new investment by FNBs Vumela Fund is set to drive local production and market penetration for Kombo King’s patented deep-fryer technology for retailers. Having already implemented the roll-out of Kombo King fryers at Pick n Pay, King Pie and Engen’s new convenience concept store, this hygienic, ventless product is set for wider market roll-out. Born from a long and successful partnership between entrepreneurs Zitulele KK Combi and Ari Jacobson, Kombo King’s original ventless and odourless deep-frying products are designed, patented and manufactured in South Africa. “Kombo King fryers were developed in response to the growing demand for convenience foods at an affordable price point, but that does not compromise on quality. Fried food is a staple in South Africa with healthy options far and few between. Our technology requires no extraction, has the added element of speed and uses reduced oil so the end product is both healthy and convenient without compromising on taste,” say the founders, Combi and Jacobson. Additionally, the portable product eliminates high fixed costs for retailers by using single-phase electricity, with savings of 60% on operational costs and 57% on electrical costs when compared to traditional fryers. The closed, automated system also adds a safety measure for employees operating the product, decreasing exposure to hot oil as well as the need for extensive training. Automated recipes ensure all foods are consistent in quality and taste, while the breakeven rate for retailers is 10 x packets of fried chips a day.

Game has released the results of a consumer survey around the ways in which South African consumers are looking to beat the price on everyday items, and the results are evidence of how stretched the consumer pocket remains in 2021: 86% of shoppers say they prioritise bargain hunting more now than they did this time last year; 55% of shoppers are using leaflets to compare prices – which is more than the 45% who are using Google searches; 50% of respondents felt they were savvier with their money than they were a year ago and said they were hunting for better deals; 75% of respondents agreed that they wanted to save wherever they could – no matter the amount saved – while most respondents said a saving of between 11% and 30% was enough to be seen as valuable to them. Unsurprisingly, consumers are visiting less stores and trying to be savvier with their money – using savings programmes on items like groceries (where savings margins are minimal) more than they do on small appliances, and with 68% saying they only visit between three and six stores per month. “The South African consumer has always been a savvy shopper, but in the last year we have seen the appetite for bargain hunting and unbeatable deals increase tremendously across all categories,” explains Katherine Madley, vice president of marketing, Game.

“In recent months we have seen proactive moves from retail malls in an attempt to attract customers back. Malls will, quite simply, not attract quality tenants unless the potential footfall is going to make the high rents attractive. Mall owners are going to have to think very differently and make significant changes in these new challenging times, where online shopping, as well as the emergence of small convenience malls within close proximity to suburban housing, gain popularity,” said Dave Nemeth, retail analyst and founder of Trend Forward, on Retailing Africa this week.

Back to Categories
Mamongae Mahlare
Inclusive growth for ecommerce in SA

Innovation
Q&A: Three ways retailers can continue to improve in 2023