The global rise of dark stores and dark kitchens

by Rael Levitt. There is a dramatic increase in the demand for warehouse spaces that can accommodate ‘dark kitchens’ and other food-related businesses.

by Rael Levitt. Behind the door of a nondescript warehouse unit in Wynberg, north of Johannesburg, lies a microcosm of how we are going to buy food for the foreseeable future. Here, food is being prepared exclusively for delivery. There is no restaurant space; not even a few plastic chairs to sit on while enjoying a quick bite to eat. Instead, a company called Collective Kitchens is managing a fully-equipped venue that can cater to more than one restaurant brand simultaneously, from exactly the same space. This delivery-only restaurant, with no customer interaction, is known as a ‘dark’ or ‘ghost’ kitchen – and it’s a real estate trend that is gaining traction around the world.

Out of the dark

The restaurant and grocery sector has been forced to adapt, or die, as a result of the coronavirus outbreak. In many parts of the world, pubs, cafés and restaurants closed in line with government lockdowns and delivery instantly became the go-to essential way in which operators could maintain an income stream. While businesses are now slowly reopening in many countries, the fear of contagion prevails, and operators are generally not in a financial position to immediately return to business as usual. Considering that the cost of setting up and running a dark kitchen is 30% to 50% less than for a traditional restaurant, it’s obvious why it’s an attractive option for struggling or emerging businesses. Dark kitchens enable restaurant brands to fulfill orders without operating from traditional restaurant premises, with no front-end or retail presence required.

The need for delivery is not just limited to meals from restaurants or take-away operators. With many people still self-isolating, the delivery of groceries has become an essential service. A shift that might have taken years to unfold has been significantly accelerated, and the long-term impact of online delivery of groceries can be expected to have a considerable impact on commercial real estate. UberEats saw a 10% increase in sales in the United States at the beginning of March, for example, when the hard lockdown was enforced; while takeaway orders in the UK increased by 18%, according to payment provider Barclaycard. In South Africa, online groceries were permitted in terms of the lockdown regulations, but food delivery was not.

However, in the weeks preceding the lockdown, there was already a spike in food delivery, and companies such as OrderIn, based at Inospace’s Island Works in Paarden Eiland, saw a significant increase in demand. Now this company is delivering groceries for major retailers such as Pick n Pay. Curry Connect, a grocery delivery service specialising in Indian food and ingredients, reported a similar surge in demand. The owners have been reaching out to restaurants in Sandton to invite the staff they had laid off, to work at their 500 square metre warehouse facility.

Before the pandemic, a small but growing percentage of South Africans bought their groceries online. This number has since escalated, with grocery delivery services around the world seeing a dramatic spike in demand,so much so, that operators – both large and small – have been scrambling to keep up. In the United States, Walmart has trained more than 30,000 workers to fulfill customers’ online grocery orders, but this has resulted in congested aisles as they must work during peak shopping periods if they are to meet the call. The cost of delivering groceries from central warehouses is estimated to be double the cost of delivery from smaller micro-fulfillment warehouses. Grocers around the world are therefore seeing the financial benefits of these so-called dark stores. Some dark stores have automation, while others are still manned by employees who do the selection of the goods purchased online.

Walmart recently opened Walmart Pickup Point, a 4,000 square metre prototype outside Chicago. Customers drive to designated parking spots at the site, where a staffer loads their order into the boot of their car. Walmart can also make deliveries from this location, which from the inside resembles a Walmart with groceries and everyday items; however, unlike a traditional Walmart supercentre, it’s not open to customers. Large South African retailers whose centralised distribution centres are unable to handle end-user customer deliveries are also opting for smaller dark stores in industrial locations near suburban areas. Delivery companies are expanding their service offering too. Uber, for example, is now delivering a range of items, not only food takeaways.

Even as lockdown restrictions are relaxed, restaurants and food retailers will undoubtedly continue changing their business models. Many behavioural scientists believe that the current crisis will lead to permanently different ways of doing things, and that the delivery of food, both from restaurants and grocery retailers, will become the norm. Once people become used to getting food deliveries at home, it will become a habit that will be difficult to break. 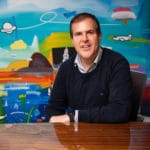