Retail needs to play a role in preserving fish stocks

by Ann Lamont. What role do small and large food retailers play in reducing over fishing?

by Ann Lamont. I am a long-distance ocean swimmer and I describe the Ocean as a cathedral, a place of silence and awe, a place where the light filters through deep waters and other worldly creatures live. I have been swimming in South Africa’s coastal waters for many years and I can feel it slowly dying. It smells different and, in many places, looks like a desert where I once saw life.

The South African produced documentary My Octopus Teacher recently won the British Academy Film Awards for best documentary and the Academy Award for best documentary feature. This comes hot on the heels of Netflix’s SeaSpiracy, which may not have all its facts correct, but nevertheless raises the awareness that our ocean and the animals that live in it are not infinite; and this precious ecosystem cannot be consumed and polluted at current rates. In this context, what role do small and large food retailers have in ensuring a significant reduction in the harmful consumption and pollution of our ocean?

Fish has been an important source of food, protein, and other nutrients for humans throughout history. In the last 50 years however, fish consumption has increased by more than double what it was. And the world’s fish consumption is still on the rise. Philip Christiani, Julien Claes, Elin Sandnes, and Antonie Stevens, wrote for McKinsey & Company, that “the world’s fish consumption is predicted to increase by 20%from 2016 to 2030, driven by global population growth, the expansion of the middle class, and greater urbanisation (giving more people more access to seafood, as well as the electricity and refrigeration needed to store it). Consumers also increasingly prefer healthy food choices, and many view fish as a good alternative to red meat.”

Overfishing has become the order of the day. Overfishing is defined as the taking of fish from the sea at rates too high for fished species to replace themselves. The number of overfished stocks globally has tripled in half a century and today fully one-third of the world’s assessed fisheries are currently pushed beyond their biological limit. With the advent of consumer awareness, the complete collapse of certain fish stocks and the Marine Stewardship Council, there has been a shift by some commercial fisheries to more sustainable fishing methods and some fishing stock has seen a recovery.

However, even in the context of sustainable fishing practices, commercial fishing is challenging as fishing models are not a perfect science in the context of a changing climate future; bycatch is a reality; fishing waste contributes significantly to plastic waste and the transport of alien species; additionally, it is difficult to track species extinction. Tragically, illegal, and legal commercial fishing has decimated the livelihoods and food security of Africa’s coastal communities. Greenpeace estimated that a billion dollars of fish stocks are illegally fished off Africa’s West Coast every year.

Aquaculture is defined by the National Ocean Service as, “the breeding, rearing, and harvesting of fish, shellfish, algae, and other organisms in all types of water environments”. It has been punted as a potential solution to limiting the destruction caused by the commercial fishing of wild fish stocks. Aquaculture is still a developing field and certain types of aquaculture are environmentally destructive. Retailers find themselves in the complex position of needing to provide fish to meet growing consumer demand, while being aware of the destructive impact of commercial fishing. Of course, consumers cannot outsource their conscience to retailers, but there is a significant lack of awareness and education amongst consumers and individual consumers lack the buying power and influence of large retailers. Of course, fish is a critical and often cost-effective source of protein for consumers. So, what can, and should retailers do?

Five of South Africa’s large food retailers work with WWF (World Wildlife Fund) to support sustainable fishing practices and to serve fish on the green list. WWF and SASSI (South African Sustainable Seafood Initiative) created the SASSI list to share with consumers the sustainability of any seafood species. The green list shares with consumers the seafood that has come from the most sustainable sources; the orange list shows seafood consumers should be cautious of; and the red list shows consumers which seafood species to avoid, as they come from unsustainable populations or have severe environmental concerns. Very few South African restaurants however communicate on their menu where fish are sourced from and whether fish are on the green, orange, or red list and what these lists mean. I ask at every restaurant I eat at whether the fish have been sustainably sourced and if they are on the green list. Whilst some managers can answer me, I have yet to encounter a waitron who can.

At the very least, large, and small food retailers should commit to providing information on the fish they serve and use the collective power of the industry to ensure commercial fishing companies provide complete information around their catch including levels of bycatch and plastics pollution. As well as this, restaurants should be happy to submit to voluntary badging. Surely retailers can play a role in influencing consumer behaviour and can reward sustainable purchasing. Organisations like Discovery which offer medical aid schemes, also have programmes that reward their clients for healthy living – why can they not do this around sustainability?

The additional complexity is the role of retail in supporting small scale fishing communities, many of which have lost their livelihoods and which in some cases, have little knowledge around sustainable fishing practices and green fish lists. There are many emerging technology solutions in this regard, for example, Abalobi. Abalobi developed a mobile app suite that allows small scale fisheries to access and drive information and resource networks, which include fishery monitoring and market opportunities. Retailers can stock products from small scale fisher people in taking a short supply chain approach and can support in the education of small-scale fisheries and ongoing technology innovation.

These actions will need to be underpinned by empathetic and systemic leadership. This cannot only be about profit or even about supply chain competition between retailers, but rather about contributing to the stewardship of our oceans whilst meeting reasonable and cost-effective food needs and supporting the livelihoods of coastal communities. This will only be done by working collaboratively with each other, supply chains and supporting innovation. Multi stakeholder collaboration and empathy for the ocean and fish, will create the profound and necessary innovation required to sustain our ocean. 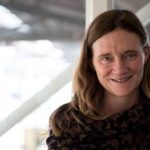 Ann Lamont is Executive Chairperson of the Two Oceans Aquarium Education Foundation. She has spent her career supporting individuals, organisations, and society to find solutions to the complex challenges of our times. She has significant business experience and has been an investment banker at Rand Merchant Bank; strategy consultant for Monitor Company; and until recently an Executive Director at EY. She is a Synergos Senior Fellow and Aspen Global Leadership Network Fellow.