The African retail sector is ripe with innovation

by Nompumelelo Mokou. The potential of the African retail market is massive and innovation abounds on the continent.

by Nompumelelo Mokou. Technology and innovation combined with population growth, urbanisation, and the steady expansion of a small but important middle class, suggests the potential of the African retail market is massive. The simple demographics say as much. And while we know Africa is not a country and we must take care not generalise markets that are quite unique, it is worthwhile looking at some general trends to build a picture of the future retail market on the continent.

Urbanisation will play an important role in economic growth across the continent. Large cities are growing at a rapid rate, with 40% of the African population now living in urban areas. It is estimated that in 2019, the population of Africa was 1.3 billion people. A large proportion of this population is between the ages of 15 to 24 years. Consultancy Compliant IA estimates that by 2030, Africa’s largest cities will have a combined buying power of USD1.3 trillion. The African Development Bank estimates there will be USD 2.1 trillion in consumer spending up for grabs across the continent by 2025.

While the population will be young, Bearing Point estimates that by 2040 the middle class could number 900 million people – greater than the middle class of China and India combined. A recent Deloitte’s Consumer Review estimates that by 2060, a staggering 1.1 billion people on the continent will be deemed middle class. We must however by cautious about this label as this middle class group is both fluid and quite fragile. We must also recognise that the continent suffers from some common debilitating realities such as poor infrastructure, inadequate logistics networks, low banking penetration, poverty and interestingly enough, a lack of physical stores.

A young population means a population keen to innovate and open to innovation. Mobile technology is playing a key role in driving innovation. Mobile phones in particular offer a direct path to consumers – as evident with the shift in consumer shopping behaviour as Black Friday took on a new shape in 2020. However, we should be careful to put too much stock in modern technology bridging the digital divide. It seems that certainly there is potential for African innovators to use technology and imagination to leapfrog the infrastructure and logistical constraints that constrict the continent

The GSMA association for mobile development noted that three-quarters of the population of sub-Saharan Africa, or 747 million people, had a SIM connection in 2018. By 2022, Africa’s mobile economy is expected to generate $150 billion in economic value. Cell phones are critical to life in Africa. According to Trendwatching, 96% of web traffic on the continent goes through a mobile network, so brands who want to engage with the African consumer need to remember that they are mobile first. As I mentioned earlier, Africa is not a country so I would like to now take a look at some case studies that will demonstrate the above within the context of retail innovation in Nigeria, Kenya and South Africa to give an idea of how regional innovators are responding to local challenges with local solutions. These three countries are the top recipients of venture capital funding on the continent, and while a few players have emerged in this space in recent year, we expect to see many more successful start-ups joining the ranks in the future. 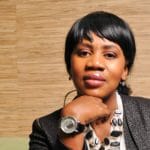 Nompumelelo Mokou is Intelligent Customer Experience Executive, Dimension Data. A Chartered Accountant by profession, she has always had a love for business. She has co-founded a project management company; been chair of the Business Women’s Association of South Africa, Soweto branch; and has headed up marketing and business development and finance in the past at various firms.